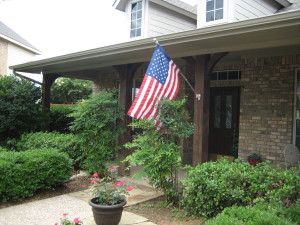 In 1958, when he was only 17 years old, a young man named Robert Heft from Saginaw, Michigan, designed our current 50 star American Flag for a high school class project.  At the time, our flag had only 48 stars and Alaska and Hawaii were being considered for statehood. Americans submitted more than 1500 designs for a new flag to President Dwight D. Eisenhower.

Heft used his family’s flag and took the blue rectangle off and added 50 new stars using white, iron-on fabric.  He received a B- on the project and went to discuss his grade with his teacher.  They agreed that if his design was chosen, his grade would be reconsidered.  Alaska and Hawaii were admitted into the union in 1959 and Heft’s design was chosen and adopted by presidential proclamation.

As Americans, we celebrate Flag Day on June 14th.  This day commemorates the adoption of our United States flag by resolution of the Second Continental Congress back in 1777.  Although we’ve had a national flag for over 200 years, we’ve only had an official Flag Day since 1949 when President Harry Truman signed the legislation for it.

The design of our American flag has been changed 26 times since 1777.  According to history books, our first American flag was sewn by Betsy Ross from a drawing given to her by George Washington.

While Flag Day is not a public holiday, it IS a nationwide observance to celebrate and honor our nation’s flag.  During this time, Americans remember what our flag symbolizes…freedom, national unity, our belief in liberty and justice, and loyalty to our nation.

The thirteen horizontal stripes on our flag (seven red and six white) represent the original 13 colonies.  The stars represent the 50 states in the Union.  The colors of our flag are symbolic as well.  Blue represents vigilance, justice and perseverance, red stands for valor and hardiness, and white symbolizes purity and innocence.

Our flag goes by several nicknames…Old Glory, The Stars and Stripes, The Red White and Blue, and The Star Spangled Banner.  No matter what you call it, our flag is an enduring symbol of our country’s beliefs and ideals.

Next week is National Flag Week and Americans are encouraged to fly their flags all week long.  In my neighborhood, the flags are already going up.  Will you be flying yours?

Author’s note:  Robert Heft died from a heart attack in 2009.  Before he died, he had copyrighted designs for American flags with 51 to 60 stars, should they ever be needed.  And, his teacher kept his word back in 1959 and changed Heft’s flag project grade to an A.