My husband tells a story about a day in the summer of 1968 when he was just seven years old. He was with his mother in the Pine Bluff National Bank in Whitehall, Arkansas. 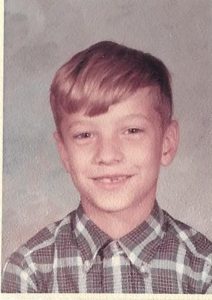 The bank was sponsoring a community fund drive for the U.S. Space Program’s race to the moon, and he decided to donate his entire life savings…$8.00…to NASA. He says from that moment on, astronauts were his heroes and he felt as if he had a part in helping the space program move forward.

Many of us in my generation remember watching live on television the night of July 20, 1969 when the Apollo 11 astronauts landed on the moon. For more on that, see my blog post from February 15, 2017:

Next Monday in this country, we will be looking up once again as the skies show us the first solar eclipse since 1918. Called the “Great American Eclipse” this eclipse is special because the path of totality will sweep from coast to coast over several hours in the United States.

The path of totality means the path across the country where the moon will totally cover the sun and create a shadow that is approximately 100 miles wide. This stunning celestial sight will appear from Salem, Oregon to Charleston, South Carolina. People outside the path of totality (such as those of us in Texas) will see a partial solar eclipse where the moon will cover only part of the sun, but that should be spectacular too! 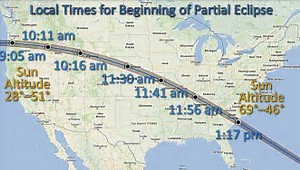 During this eclipse, which will pass through your viewing location in about two and a half minutes, the sky will darken and temperatures will most likely drop. Nasa has created a special eclipse site which displays the locations of the path of totality across the country as well as some viewing safety tips.

It is suggested that people take safety precautions when viewing the eclipse because looking with unprotected eyes can cause permanent eye damage and even blindness. Sunglasses are not enough to protect your eyes! 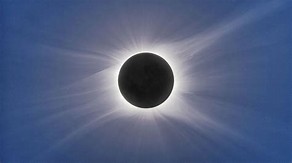 You can watch the eclipse happen live on NASA’s eclipse site or you can buy some inexpensive eclipse glasses or even make your own pinhole camera to use as an eclipse viewer. There are directions for making a pinhole camera out of cardboard and aluminum foil on the NASA site under the “Safety” tab.

There are maps on the internet showing the best spots in the country to view the eclipse and people are planning trips to those places. The two locations in the country where the passing of these two celestial bodies will last the longest with a duration of two minutes and forty-one seconds, are Carbondale, Illinois and Hopkinsville, Kentucky.

We have close friends who are traveling with their family to Wyoming to be in the path of totality during the eclipse. We will be here in Texas looking up but wherever you are on Monday, August 21st, be safe and enjoy the Great American Eclipse!

5 thoughts on “The Great American Eclipse”