From there to here,

from here to there,

For my birthday last week, I asked for a new book by one of my favorite authors, Theodor Seuss Geisel, better known as Dr. Seuss.  I grew up reading his books, read them to my younger brothers, then read them to my own children.

The unfinished manuscript for the new Dr. Seuss book, “What Pet Should I Get” was found in his office by Geisel’s wife after his death in 1991.  It includes an eight page note from the publisher about how the decisions were made for finishing the book, and also includes some history and pictures of Geisel with his own pets.  It’s a delightful read (surprise) and ends with a bit of a mystery and an opportunity for the reader to decide how the story ends. 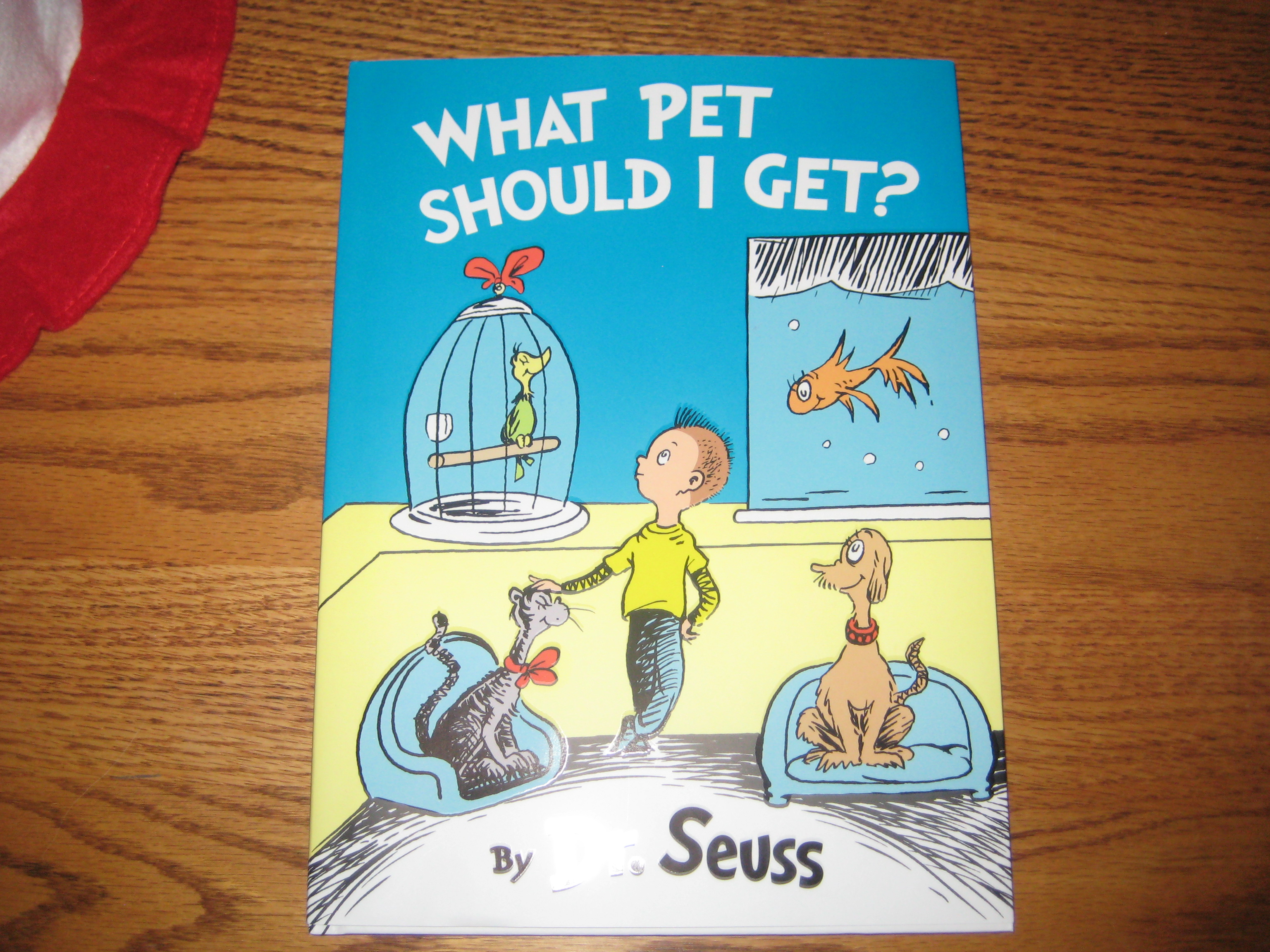 If you’re over the age of five, you’ve most likely heard of Dr. Seuss and probably have read at least one of his many books.  What you might not know, is that he wrote under two pseudonyms…Theo. LeSieg (Geisel spelled backwards) and Rosetta Stone in honor of the last name of his second wife, Audrey Stone Geisel.  He used “Dr. Seuss” for the books he both wrote and illustrated, and Theo. LeSeig and Rosetta Stone for books that he wrote with other illustrators.

I read to my children every day when they were small.  That’s one of the things I did well as a parent.  One of my sons loved the book “Wacky Wednesday” by Theo. LeSieg and wanted me to read it night after night.  I would get so tired of reading that book and finding all the “wacky” things on the pages that I used to say, “Let’s save that one for your dad because he really loves to read it to you.”  Yes, that is a true confession. 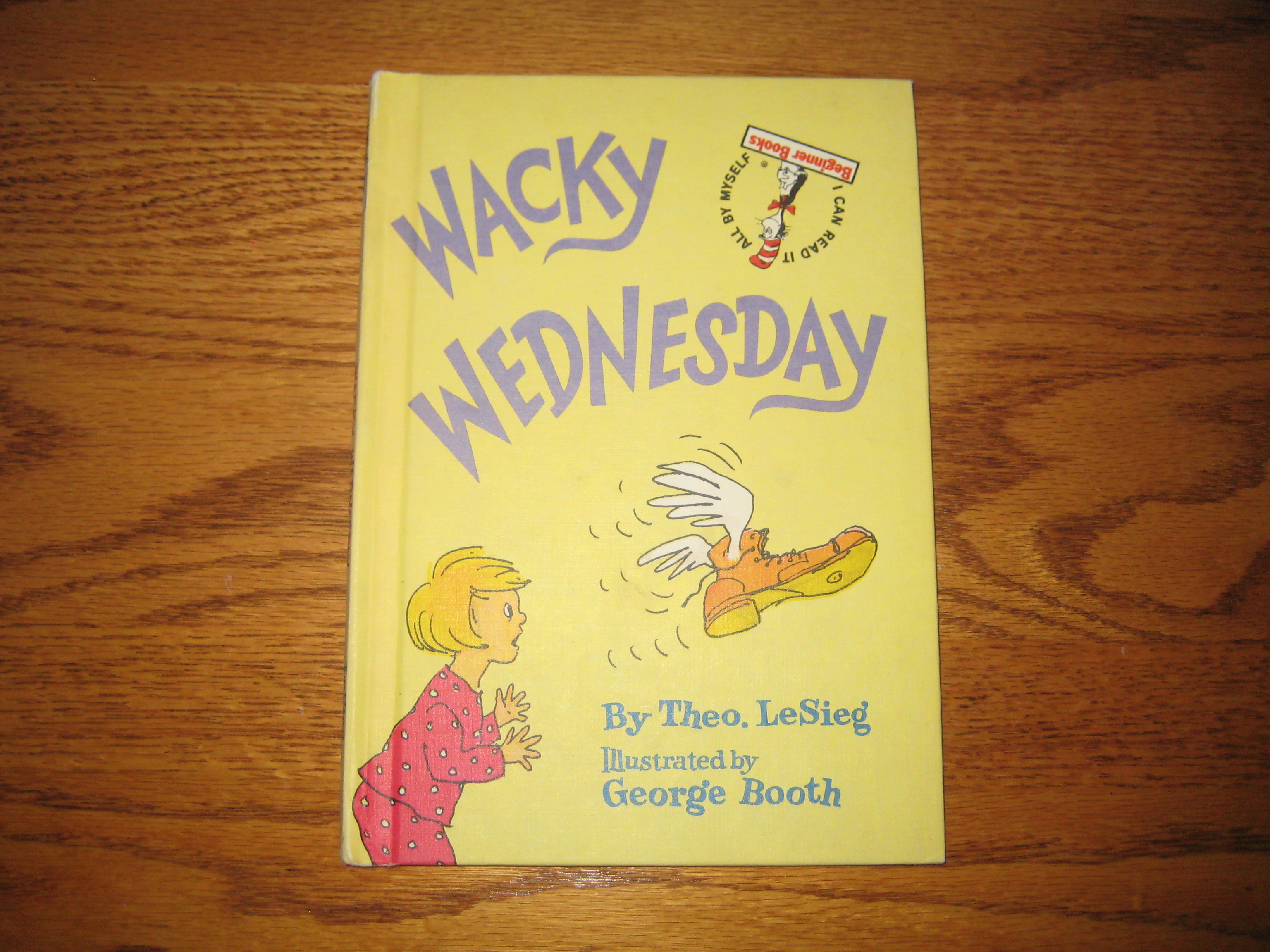 Another of my children was on a “Cat in the Hat” kick one summer and wanted me to read it to her every night.  After a few weeks, I could recite the book without even reading it.

I’d like to say it was my outstanding reading aloud skills that accounted for my children’s love of these beloved books, but alas, I cannot.  Dr. Seuss had a way of writing books that were fun to read, fun to hear, and he paired his words with pictures that were enormously entertaining. 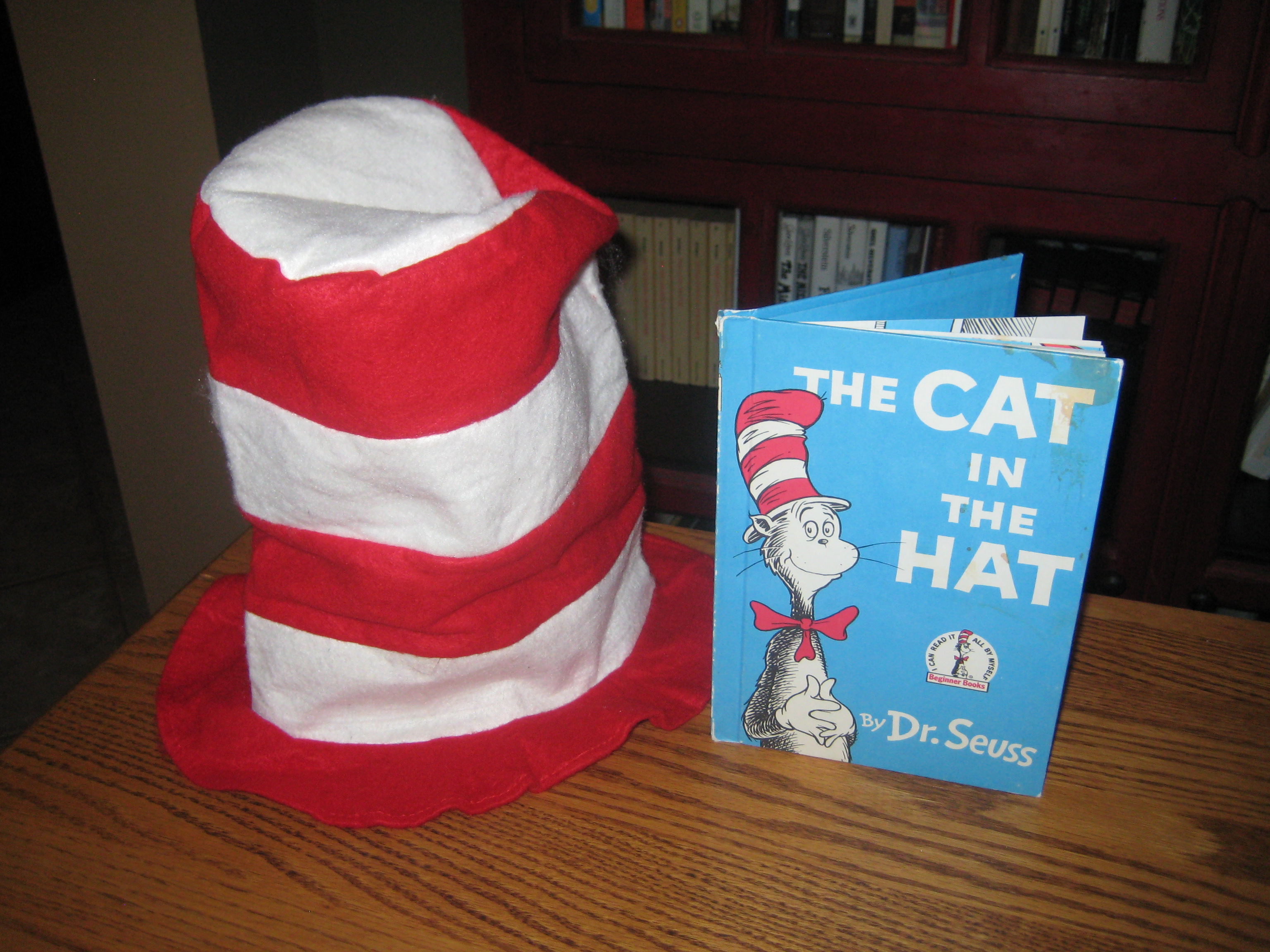 I have my favorites too, “Ten Apples up on Top!”, “Because a Little Bug Went Ka-CHOO!”, “One Fish Two Fish Red Fish Blue Fish”, “Green Eggs and Ham”.  And yes, I did use green food coloring and make green eggs and ham for them when they were small.  Of course, no one would eat the green eggs so I only made them once! 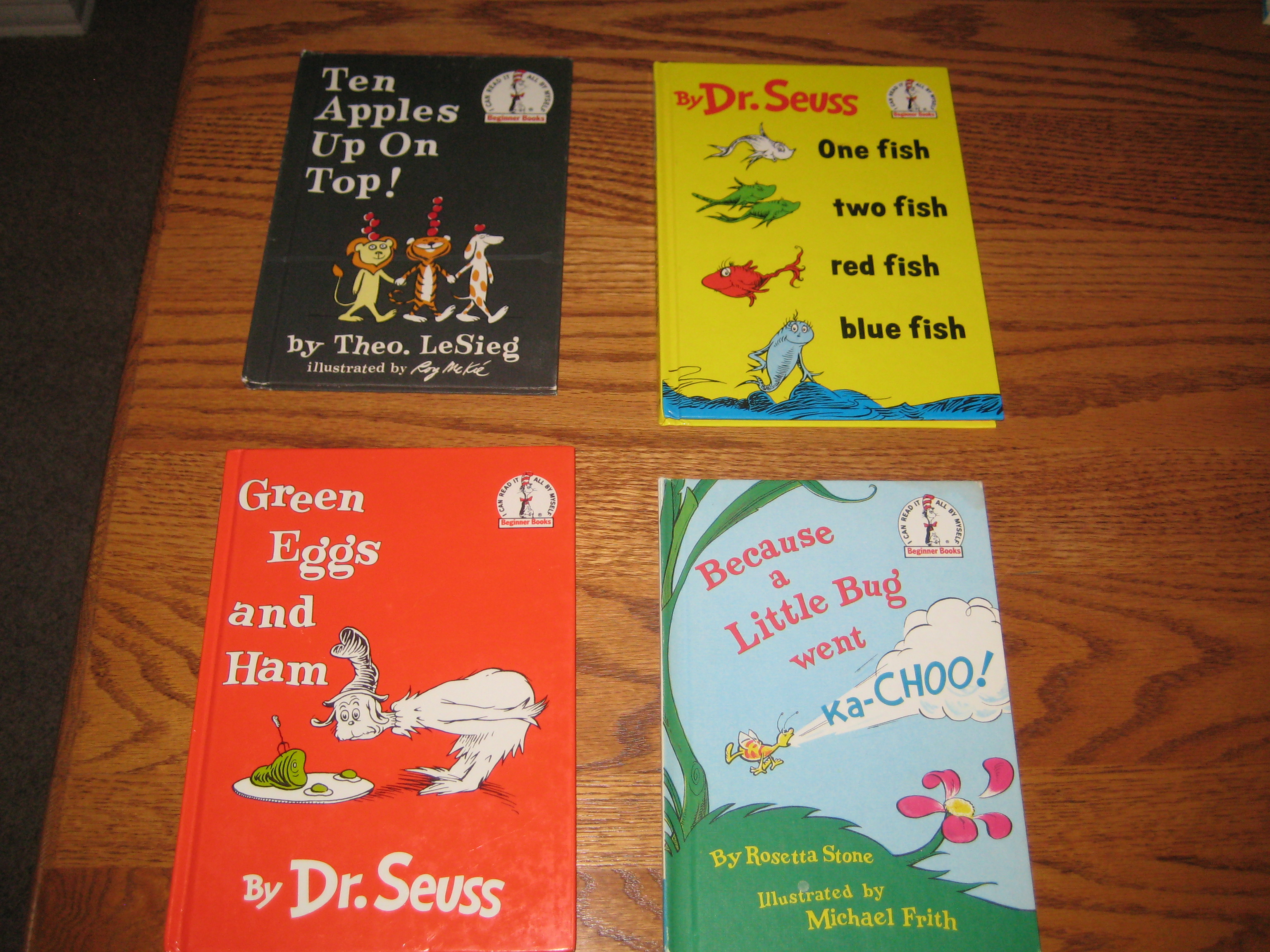 The book “Oh the Places You’ll Go” is a favorite of mine too and I have gifted it many times to high school graduates.  It’s about life and its challenges and was published in 1990.  It was the last book Dr. Seuss had published while he was still alive.

Theodor Seuss Geisel was born on March 2, 1904 in Springfield, Massachusetts.  His middle name, Seuss, was also his mother’s maiden name.  He graduated from Dartmouth College, and then attended the University of Oxford where he majored in English Literature and dropped out without completing his degree.  Later, he was given an honorary doctorate from Dartmouth for his contribution to children’s literature.  He then added “Dr.” to his pen name. 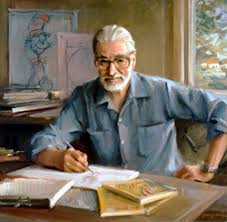 In his early career, he was an illustrator and a cartoonist for magazines such as Life, Vanity Fair and The Saturday Evening Post.  He was also a (mad) ad man and worked as an illustrator for advertising campaigns for companies such as General Electric and Standard Oil.  In 1935, he wrote and drew a short-lived comic strip called “Hejji”.

His first book, “And to Think That I Saw It on Mulberry Street” came out in 1937.  Geisel received 27 rejection letters from publishers before a friend from Dartmouth who worked at Vanguard Press finally accepted the book for publication.  Geisel later said he was walking home to burn the book when he had a chance (and life changing) meeting with his old friend. 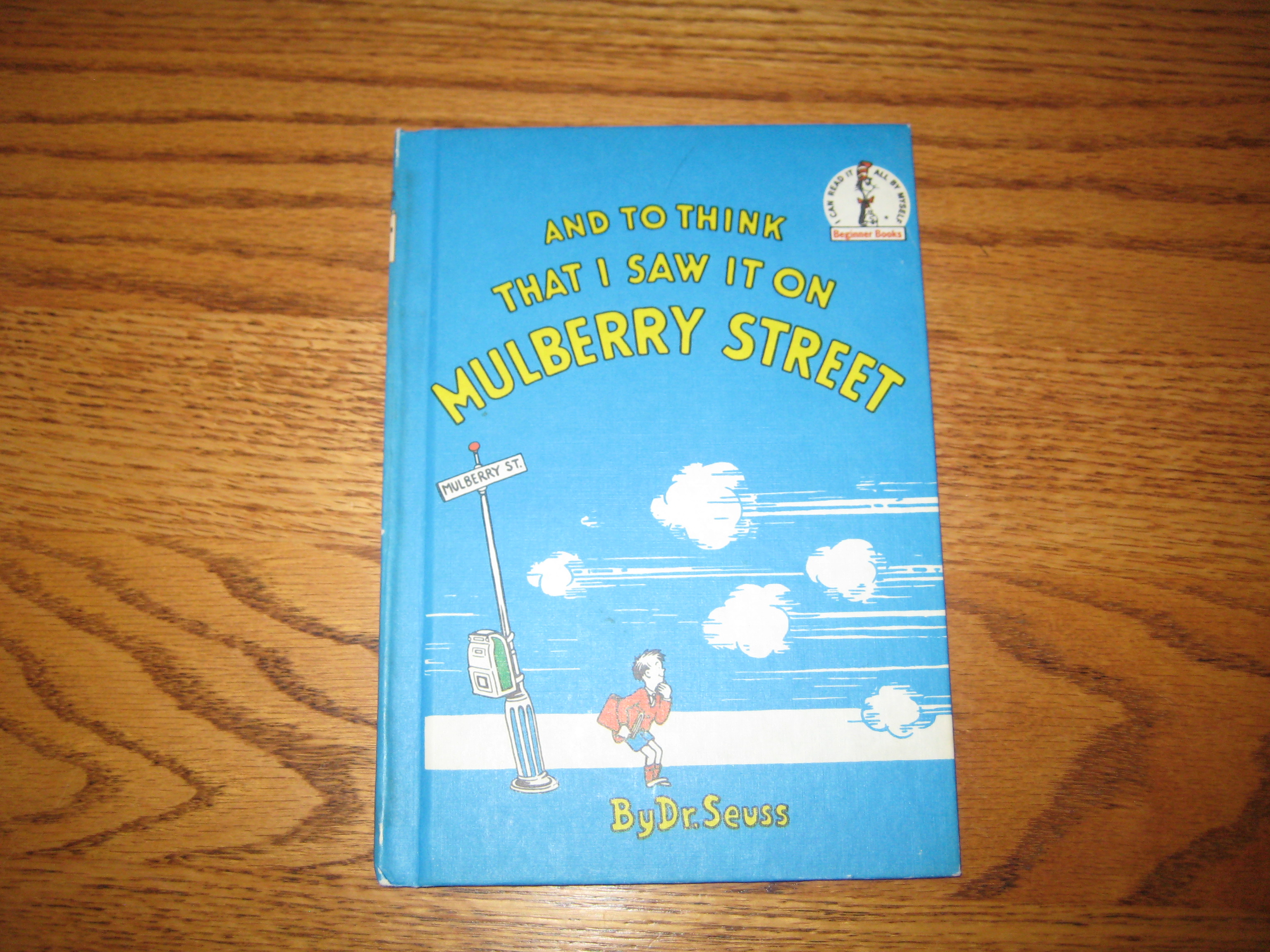 During the 1940’s, Geisel wrote three Caldecott Honor Books:  “McElligot’s Pool”, “Bartholomew and the Oobleck”, and “If I Ran the Zoo”.  A Caldecott Honor Book is a runner up for the Caldecott Medal which is awarded annually by the American Library Association.  This award is given to the artist who creates the most distinguished picture book of the year. 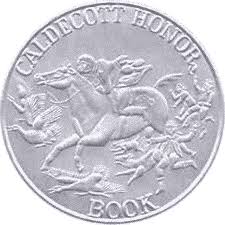 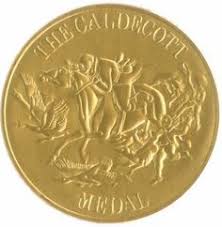 In May 1954, Life Magazine published an article about illiteracy among school children.  It said that children were not learning to read because beginning reading books were so boring.  The director of the education division at Houghton Mifflin Publishing asked Geisel to write a beginning readers book using a list of 250 words that he thought were important for first-graders to know.  He challenged Geisel to “bring back a book children can’t put down.”  Nine months later, “The Cat in the Hat” was completed using 236 of the words on the list. 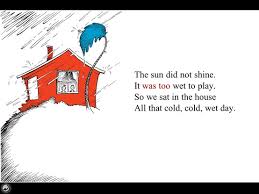 Geisel didn’t become the definitive children’s book author and illustrator until “The Cat in the Hat” was published in 1957.  It was followed by “How the Grinch Stole Christmas!”, “One Fish Two Fish Red Fish Blue Fish”, “The Cat in the Hat Comes Back”, and “Green Eggs and Ham” and by then Dr. Seuss had become a celebrity. 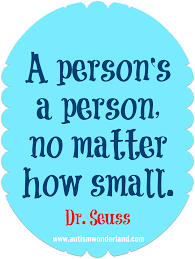 He has sold more than 200 million books around the world and his books have been translated into 15 other languages.  When he died at the age of 87 in September of 1991, Geisel had written and illustrated over 60 books.  “What Pet Should I Get?” is now one of my new, personal favorites. 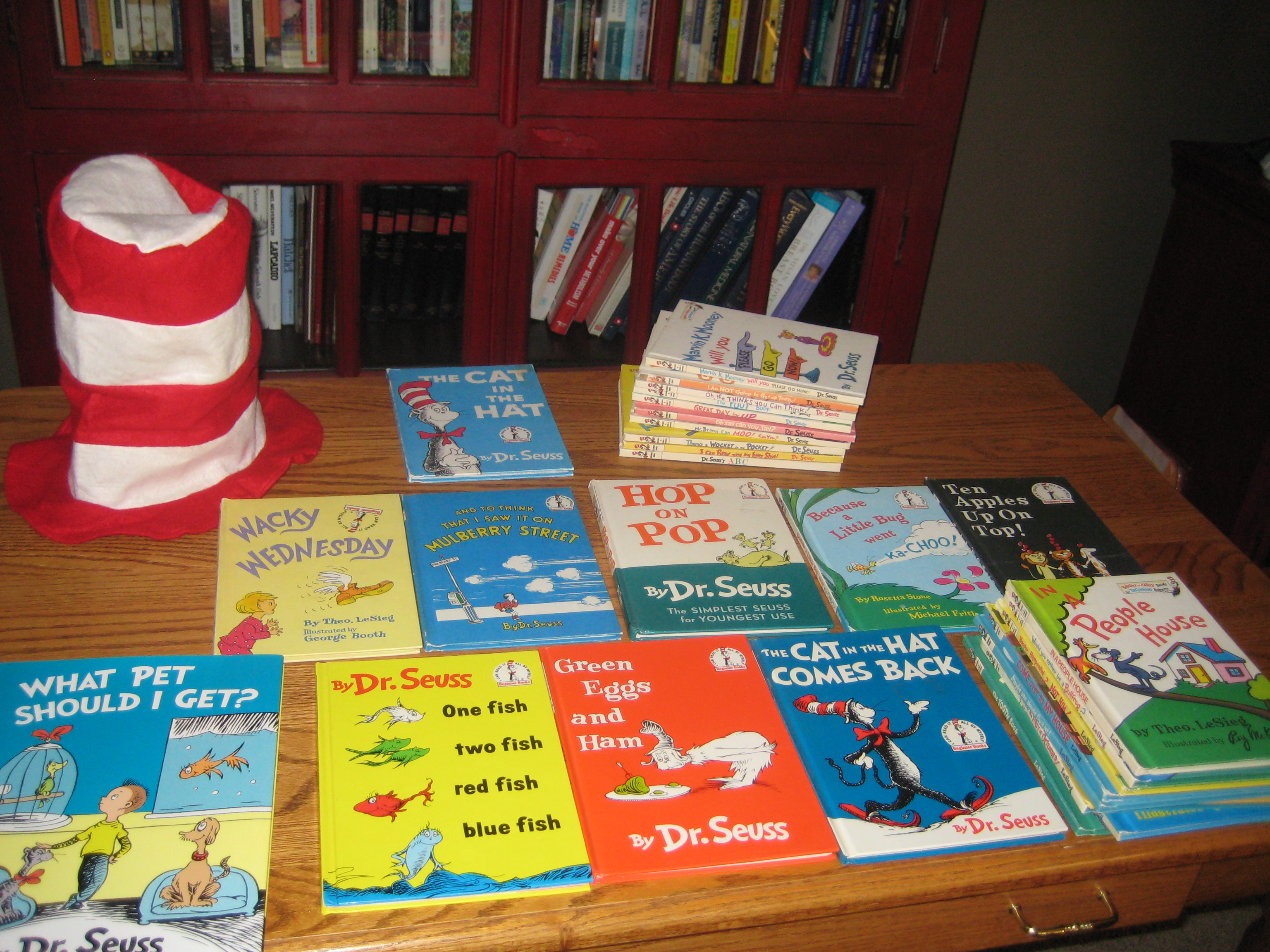 Here are some fun facts about Dr. Seuss:

*He has a star on the Hollywood Walk of Fame.

* The Dr. Seuss National Memorial Sculpture Garden in his hometown of Springfield, Massachusetts features sculptures of Geisel and of many of his characters. 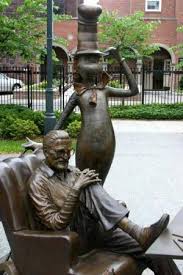 *He never had children of his own but liked to say, “You have ’em, and I’ll entertain ’em.”

* The Theodor Seuss Geisel Award was established in 2004 and is given annually to the author(s) and illustrator(s) of the most distinguished American book for beginning readers published in English in the United States during the preceding year.

*Theodor Seuss Geisel was awarded a Pulitzer Prize in 1984 “for his special contribution over nearly half a century to the education and enjoyment of America’s children and their parents.”

*Read Across America Day is held every year on Theodor Seuss Geisel’s March 2nd birthday.  Sponsored by the National Education Association, this is a day for every child in every community across our country to celebrate reading.

*Theodor Seuss Geisel had a stamp printed in his honor by the United States Postal Service.

*www.seussville.com is a fun Dr. Seuss website for students, parents and educators.  Make sure you turn on your speakers to hear the sound effects and also don’t forget to sign up for The Seussville News email newsletter! 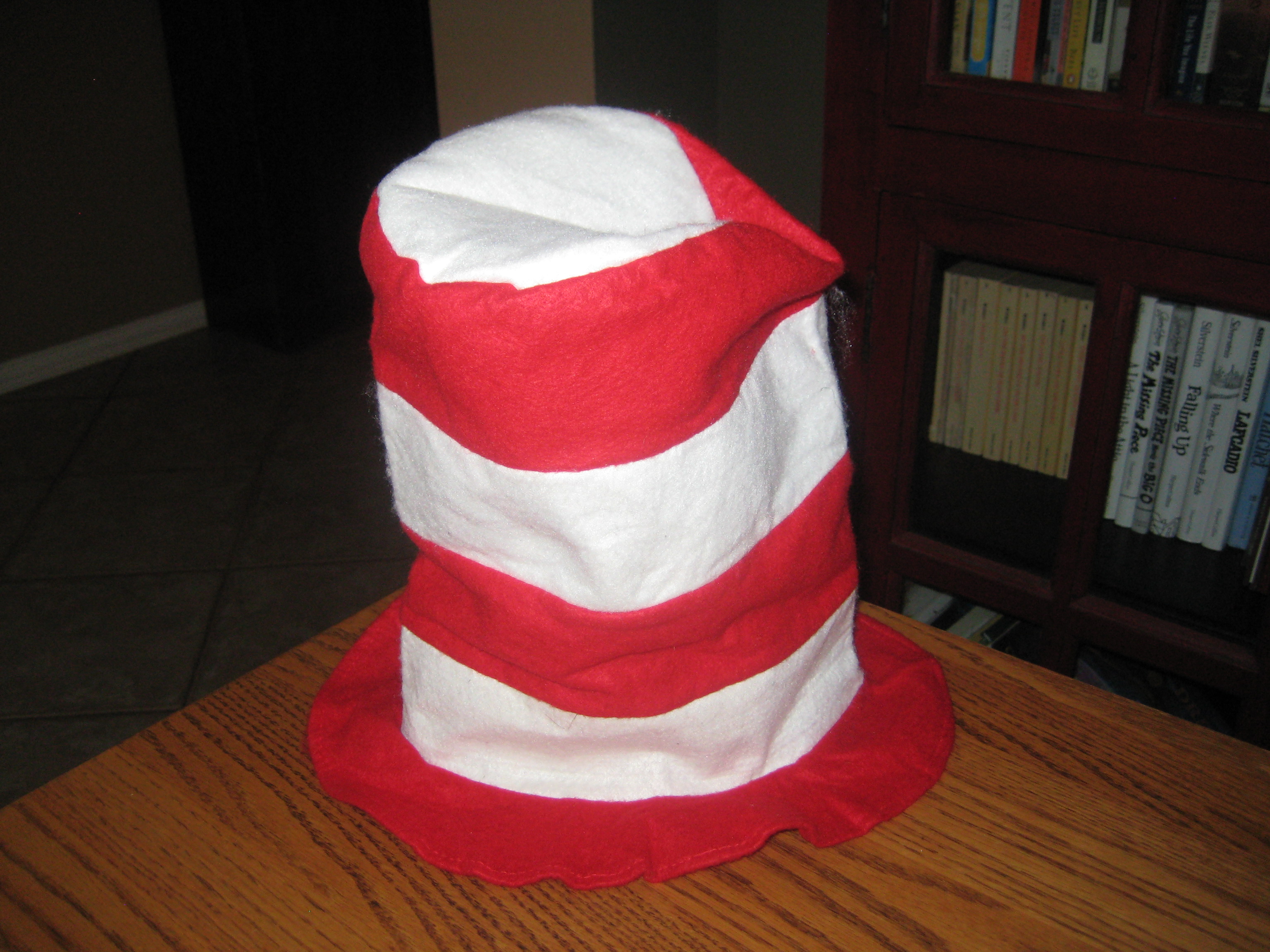 4 thoughts on “Just What The Dr. Ordered!”