Around 8:30 Saturday night, my husband and I drove through the rain to Dallas Love Field to welcome home the WWII Veterans on Honor Flight #39. We each had a small flag in hand and as we walked into the airport terminal, we spotted other groups carrying flags, balloons, and homemade signs as they headed to the second floor. 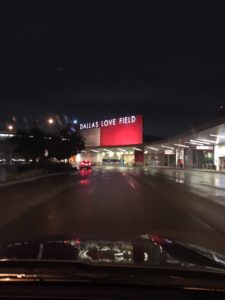 The flight wasn’t due in until 9:30, so we had plenty of time to chat with many of the other folks who had gathered to welcome the flight back to Dallas-Fort Worth. Some had family members on the flight…husbands, fathers, grandfathers, guardians, medical personnel…and others were veterans themselves who simply came in support of the program.

People were pretty calm until a volunteer announced that the WWII Veterans were on their way to our hallway. As the members of Honor Flight #39 reached us, the excitement level in the room went sky high! 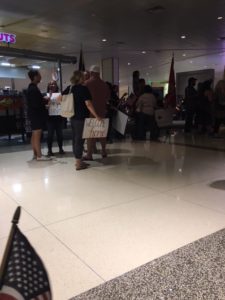 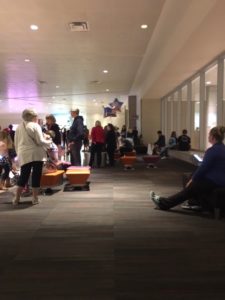 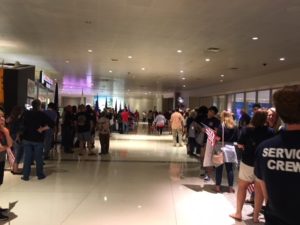 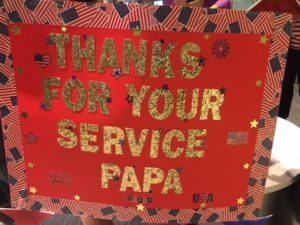 If you aren’t familiar with the Honor Flight Program, it’s a national network of volunteers established for the purpose of getting as many WWII Veterans as possible to Washington D.C. to view the World War II Memorial.  The Honor Flight Organization provides a 36 hour, overnight, all-expense paid trip for the veterans to visit not just the WWII Memorial, but also the Korean, Vietnam, Marine (Iwo Jima), Navy, and Air Force Memorials as well as Arlington Cemetery. 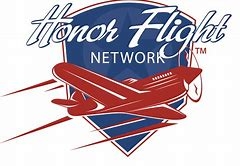 Each veteran is accompanied by a volunteer guardian who travels with them to ensure their safety and comfort. There is required training for the guardians and also a fee they must pay. Spouses are not allowed to be a guardian, so many veterans are accompanied by children or friends.

If a veteran doesn’t have a family member or friend who can go with them, there are a number of volunteer guardians who will step in.  The veterans wear blue shirts and the guardians wear red ones during the trip. 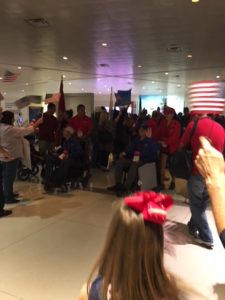 The idea for the first Honor Flight came from Earl Morse, who was a physician’s assistant and a pilot from Springfield, Ohio. After the National World War II Memorial was completed in 2004, Morse realized that many of his older patients would not be able to travel to Washington D.C. to visit their memorial.  So, Morse, the son of a Korean and Vietnam War veteran, pitched his idea of flying the veterans to see the WWII Memorial, to local pilots. By January of 2005, a board was formed, funds were raised, and other volunteers had joined the effort.

According to the Department of Veterans Affairs, an estimated 640 WWII Veterans die each day. The Honor Flight Network has grown very quickly in communities across the country to get as many WWII Veterans as possible to Washington D.C. 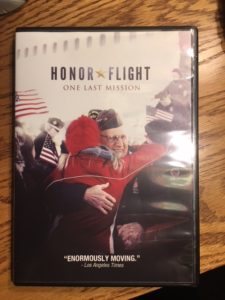 Honor Flight DFW was established in September 2008 to bring the program to WWII Veterans in the Dallas/Ft Worth/North Texas area. The first Honor Flight from DFW departed in 2009. Since then, Honor Flight DFW has flown over 1100 WWII veterans to Washington, DC.

By the time the veterans on Honor Flight #39 had deplaned and began walking toward us Saturday night, at least 200 people had gathered to welcome them back. We felt so proud to be Americans as we joined the others who were clapping and cheering and honoring our WWII Veterans. 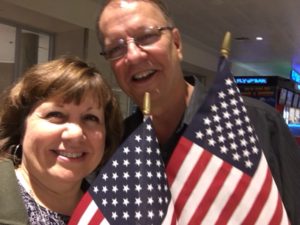 Among the WWII Veterans on Honor Flight #39, was James Leavelle. Leavelle was the homicide detective who was escorting Lee Harvey Oswald through the basement of the Dallas Police Headquarters in 1963 when Oswald was shot by Jack Ruby.  Mr. Leavelle was in a wheelchair that was being pushed by his Honor Flight Guardian. He had his white cowboy hat on his lap. 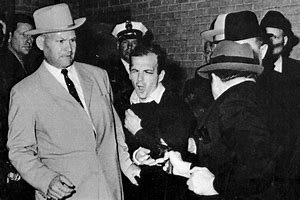 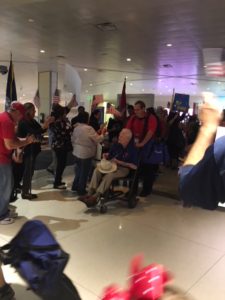 Welcoming home the Honor Flight Veterans was an incredibly moving experience that I will never forget.  It was a privilege to be a part of the group at the airport Saturday night.

If you live in the DFW area and would like to welcome home an Honor Flight,  there will be one more flight this year.  Check www.honorflightdfw.org for more information.  In other parts of the country, you can search for “Honor Flights near you.” 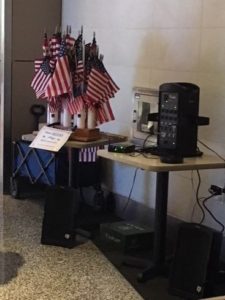