I’ve had stories bouncing around in my head this week…lots of stories.  As a writer, I love to watch, hear and read stories, especially when they are true stories about real people.

As Vicki and I work to finish our third book together, “The Day the Turkey Came to School” that story has been prominent in my mind.  Like our other books, it’s based on a true story about something that really happened. 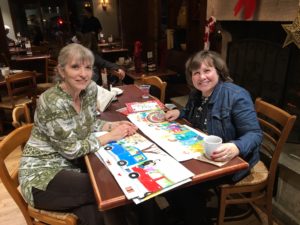 What’s different about this one is that it happened one ordinary day in November when I was taking my ten year old daughter to school.  Sometimes, the stories that happen when we least expect them turn out to be the most fun!

Working at the pharmacy two days a week, I have the privilege of hearing other people’s stories on a regular basis.  Sometimes the stories develop over time as I get to know customers.  Other times, someone will share a story so personal and heartbreaking that I can’t get it out of my head and I add that person to my prayers. 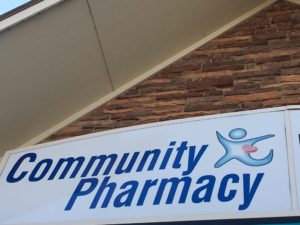 That happened the day a young woman came in who had been beaten by her live-in boyfriend.  She said, “I moved in with him against my parents’ wishes because I thought he truly loved me.”  She had a blackened eye and a broken nose and a concussion as well as cuts and abrasions.

She said she was going to stay with her pastor and his wife.  I offered her water and sat with her while she waited for her medication to be ready.  She wanted to talk about what had happened…because sometimes people just want someone to listen to their stories.

Another story I have recently had the privilege of reading, is “The Polygamist’s Daughter” by Anna LeBaron with Leslie Wilson.  I was asked to read an advance copy of the book which is coming out in March of 2017 and to write an honest review for the Goodreads Website.

Anna LeBaron’s story of growing up as the daughter of a polygamist cult leader is another one that has stayed with me.  The first line in her book hooked me:

“At age nine, I had forty-nine siblings.”

Most of us have had a fairly normal childhood.  Not Anna’s…hers was anything but normal with the regular, quick moves to different homes to stay a step ahead of the authorities, selling painted rocks and slices of cake door to door as a child in Mexico, going to school then working into the night to help the “family” business, getting food and clothing from dumpsters, and not having the normal childhood experiences or things that most of us took for granted.

If you are looking for a very good read in 2017, I hope you will consider “The Polygamist’s Daughter.”

Finally, the last story on my mind this week is that of Katherine Johnson.  Awarded the Presidential Medal of Freedom by President Obama in 2015, Katherine was a mathematician and physicist who began working for NASA in 1953 doing math calculations.

While temporarily assigned to help the all-male flight research team at NASA, Katherine’s intelligence and knowledge of analytic geometry quickly impressed the higher ups.  She had to deal with sexism and racism and having to use the “colored” restroom and coffee pot, but ultimately her work for NASA was so impressive that John Glenn wanted her to check the accuracy of the flight number information before he flew.

Katherine worked for NASA for decades as an aerospace technologist calculating trajectories, launch windows and emergency back-up paths for many space flights from Project Mercury all the way to the Space Shuttle Program.

Katherine’s story is told along with that of her friends, Mary Jackson and Dorothy Vaughan in the movie, “Hidden Figures” which is in theaters now.  My husband and I saw “Hidden Figures” on Monday night and we were both on the edge of our seats watching the entire movie.  At the end, the audience applauded. 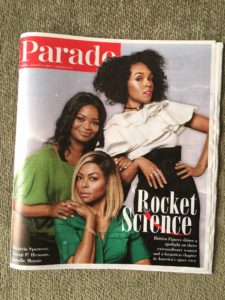 There are so many interesting stories all around us.  We simply have to listen for them.  What stories are happening around you?