My husband and I are big movie buffs, and one of our favorite things to do this time of year is to watch Christmas movies.  Since we’ve accumulated a small collection on DVD, we pull them out Thanksgiving Weekend and try to see as many as possible by Christmas Day.  I bet a lot of you do the same at your house too!

Many Christmas movies (think “It’s A Wonderful Life” and “Miracle On 34th Street”) are heartwarming classics with messages of hope, and others (such as “Elf” and “The Santa Clause”) are just plain fun to watch!

I began the tradition of watching Christmas movies in the mid to late 1960’s with my younger brother, Jeff.  We could get three channels…ABC, CBS, and NBC…on our one, black and white television set in the living room back then, and I would read the TV Guide to find out when the movies were scheduled to be shown.

In those days, there was no “On Demand” or DVR, or VHS or DVD movies.  Christmas movies were shown once a year whenever the networks scheduled them and if you missed the showing, you just missed out.

The first Christmas movie I remember watching as a young child was “Miracle On 34th Street” (released in 1947).  My brother and I would sit on the carpeted floor with our backs against the living room sofa, wishing we could be at the Macy’s Thanksgiving Day Parade and watching for Santa Claus to appear on the screen. 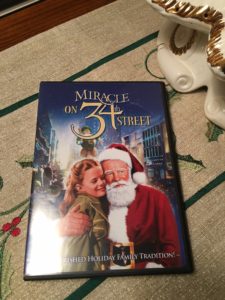 We would wonder how anyone could question whether or not there really was a Santa Claus.  We knew he existed and we both wanted to be on the “nice” list at Christmas time!

“Rudolph The Red-Nosed Reindeer” (released in 1964) and “A Charlie Brown Christmas” (released in 1965) came out while we were young and we grew up looking forward to watching them every December.  Recently, while shopping at Home Depot, I saw that they had a five feet high LED 3D Pre-Lit Yard Bumble for sale for $99.

While these Christmas movies have all been around for 50 years or more, the very first Christmas movie came out many years before any of them.  It was made in 1898 by George Albert Smith, a British pioneer of filmmaking, and was called “Santa Claus.”  It was not only the first Christmas movie, but was one of the first movies ever made on any topic.  The movie is just one minute and 17 seconds long and has no sound, but it was considered a technical marvel for its time.

Here’s a link for you to watch “Santa Claus”, the first Christmas movie:

When my own children were growing up, we especially enjoyed watching “It’s A Wonderful Life” together as a family every Christmas.  While George Bailey’s story is a staple of the holiday season now, it was a flop when it came out in 1946 even though it was nominated for five Academy Awards.  Movie-goers found the subject matter rather dark and depressing at the time…perhaps they were looking for lighter fare since WW II had just ended. 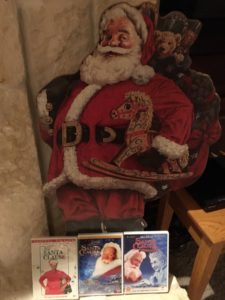 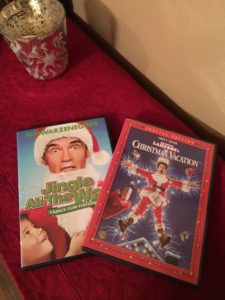 We also loved the first two “Home Alone” movies (released in 1990 and 1992) and even drove by the house (in Winnetka, Illinois) where the movies were filmed, one Christmas when we lived in Chicago.

The movie, “Elf” (released in 2003) was another favorite.  What’s not to like when you have Will Ferrell, Bob Newhart, Ed Asner, James Caan, and Mary Steenburgen in the same movie!

Add to that, Zooey Deschanel’s wonderful singing of “Baby It’s Cold Outside” and the four food groups the elves try to stick to…candy, candy canes, candy corns, and syrup…and you have a recipe for two hours of Christmas fun!  According to some reports, Jim Carrey was originally offered the role of Buddy but turned it down to pursue other movie roles.

I didn’t see “A Christmas Story” (released in 1983) until I had children of my own, but when I did, I understood Ralphie’s longing for the “Red Ryder carbine-action two-hundred-shot range model air rifle” because one Christmas as a child, I wanted a certain new sled that badly too.  Rumor has it, he expresses his desire for the air rifle 28 times in the movie!  Another bit of trivia about Ralphie, is that the actor, Peter Billingsley, who played him in “The Christmas Story” also played the elf, Ming Ming, in “Elf.”

This upcoming weekend, we hope to watch “Elf” as well as my husband’s favorite Christmas movie, “White Christmas” (released in 1954).  One of my Facebook friends says it’s her favorite Christmas movie too because she and her mom had a tradition of watching it every year and “Would sing, Sisters, sisters together in grand style. Fabulous memories of sweet times I deeply miss.”

No matter which Christmas movies are your favorites, treasure the time spent watching with family and friends.  And whatever you do, try to stay off the “naughty” list!