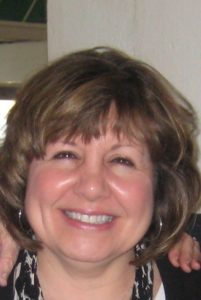 Janet Sever Hull grew up in Elkhart, Indiana and is a graduate of Purdue University.  She has been writing since her teen years and is the author of many stories.  At age 17, she was honored with her first writing award in a national journalism writing contest sponsored by the Columbia Scholastic Press Association.  Her story about her friend, Ray Reitz, won “Best Article” in the competition.

Janet lived most of her adult life in the Midwest but has called Texas her home for the past 12 years.  She and her husband, Jeff, have four adult children, and three perfect grandchildren.

Janet’s first book, “The Button Box” was published in July of 2014 and was a finalist in the national Best Book Awards.  Her second book, “Which Came First?” came out in April of 2016 and won the “Best Children’s Book” award at the 2017 North Texas Book Festival.  Janet’s book, “The Day The Turkey Came To School” was published in September of 2017 and won “Best Children’s Book” at the 2018 North Texas Book Festival.

Janet’s fourth book with illustrator, Vicki Killion Guess, is a fun Halloween story called “The Halloween Scare” and was released in softcover in August of 2021.

In November of 2021, Janet released a Christmas book for grownups called “The Christmas Church.” It is a Christmas gift book about the importance of family and memories and those who impact our lives with their love. The Christmas Church was the biggest selling book of 2021 for Janet and sales continued into January of 2022.

Janet has been a member of the Society of Children’s Book Authors & Illustrators since 2009 and was the Featured Author at the 2018 North Texas Book Festival in Denton, Texas. She is a champion of literacy and has served on the board of the North Texas Book Festival for the last five years. You may contact her at janetseverhull@yahoo.com. Janet is currently working on her sixth book with illustrator, Vicki Killion Guess. It is scheduled for release in the fall of 2022. 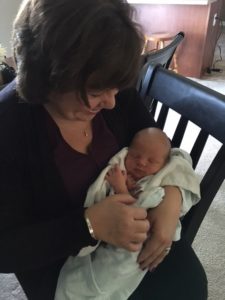 From the author:  In 1999, I wrote a story about an experience from my childhood called “The Button Box”.  A couple of years later, I entered my story in the Kalamazoo Gazette Community Literary Contest in Kalamazoo, Michigan, where I lived at the time.  My story won first place in the “adult memoir” category and was printed in the Kalamazoo Gazette on Christmas Day of 2001.

It was a wonderful honor and I was delighted that the selection committee liked my story so much.  But what came after that still amazes and humbles me to this day.  For four years after my story appeared in the local paper, people wrote to me and told me how much my story meant to them and how it had touched them.

Many people said they had kept my story or had sent it to other family and friends out of town to read.  Everyone who wrote told me about their own family’s button box and the treasured memories they had of spending time looking through the button box with their mother or grandmother.    A number of people encouraged me to turn my story into a book.

My book, The Button Box will be published in July of 2014.  This time it has wonderful painted illustrations done by my dear artist friend, Vicki Killion Guess.  I’m hopeful that the story will again be meaningful to all who read it.

Here is a picture of the actual button box: 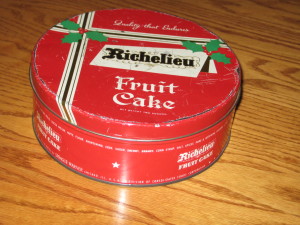 And a picture of the book which is available at selected stores in Texas, Oklahoma, Michigan, Delaware, Missouri, Wyoming, Colorado, New Mexico, Louisiana, and Indiana, on www.amazon.com, and at www.janetseverhull.com.  Those who order from Janet’s website will receive a signed copy and a bookmark.

In November of 2001, my much loved maternal grandmother died at the age of 87.  That same month, I wrote the story of my second book, “Which Came First?” in tribute to her.  She was a farm woman who loved being outside with her plants and animals and especially with her grandchildren.

Her farm was a magical place for children.  The barn was full of animals and chickens, ducks, peacocks and one very large turkey who had the run of the farm, there was an apple orchard where one could climb a tree and eat apple after apple while perched on a branch, a giant vegetable garden with a strawberry patch on one end, flowers to smell and to help plant, an old fashioned clothesline that doubled as a tent holder, a hayloft where one could get lost in a book, and a horseshoe pit for games when the work was all done for the day!

Like my brothers and cousins, I loved going to grandma’s farm.  “Which Came First?” is a story about an experience I had one day on the farm when my grandmother taught me about facing my fears and not giving up even though I felt like a “chicken liver”.  The book is dedicated to her…Pearl Ritchie Barrett Wood…and I believe that somewhere, somehow she knows and is smiling about it. 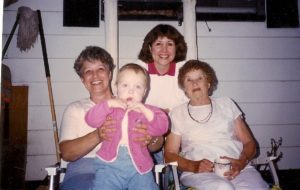 Like my other books, “The Day The Turkey Came To School” is based on a true story.  This one happened one November day when I was driving my daughter, Anna, to elementary school.  As we neared the school, there was a line of cars in the school drive that spilled out onto the street.  No one knew what was causing the jam until we got closer and saw the turkey!

The first part of the book is true and even the name of Anna’s elementary school in Portage, Michigan is the same.  The second part of the story is fiction and I based the heroine of the story, Miss Thompson, on my daughter-in-law, Paige Thompson Sever, who really is a teacher!

I wrote this story because I remembered how this unlikely event made everyone stop from rushing though their busy morning and laugh and visit with the other parents.  It’s my belief that we need to appreciate the people in our lives and sometimes fate demands that we do so! 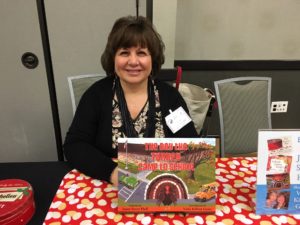 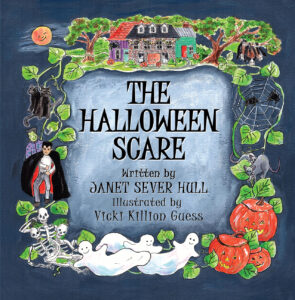 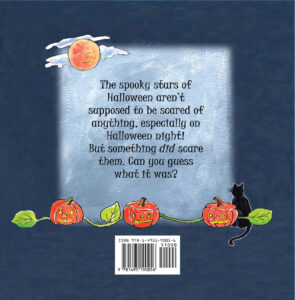 “The Halloween Scare” is a story I wrote very early one Saturday morning last October. I had actually gotten up before the crack of dawn to work on my upcoming Christmas book called “The Christmas Church.” I was leaning against the kitchen counter waiting for the last of the coffee to drip through the filter. As I waited, I admired our Halloween decorations and thought about all the years of Halloween fun when my children were growing up. I began to wonder what would scare all of the Halloween characters who are known for scaring others every October. The story began to take shape in my mind so I poured some coffee, sat down at my computer and wrote “The Halloween Scare” very quickly in less than an hour.