Last night, we were returning from a movie and we stopped outside and admired the big, bright full moon in the sky. There’s been a lot in the news feeds this week about the moon. I hope you’ve taken a few minutes to look up and see the “Super Blue Blood Moon” as it’s being called. 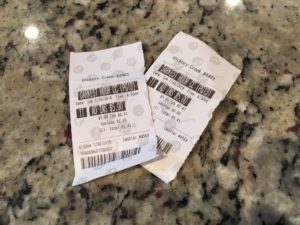 The reason that this particular moon sighting is being talked about so much, is because it’s rare to see these three moon events at the same time. It’s the first time since March 31, 1866 (the year after the Civil War ended) that we have had a Super Moon, a Blood Moon and a Blue Moon all at the same time. They are calling it “a lunar trifecta.”

Our moon orbits the Earth approximately every 27 days and a Super Moon occurs when a moon is both full and at its closest point to the Earth. Being closer to the Earth is what makes it appear larger in the sky. 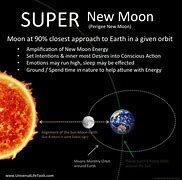 The second full moon in the same calendar month is called a Blue Moon…not to be confused with a Blue Moon Beer. Blue Moons usually occur every two to three years, and most often when the first full moon falls very early in a calendar month.

A Blood Moon refers to the color of the full moon on the night of a total lunar eclipse. A lunar eclipse is when the sun, the Earth, and the moon line up in space. When the moon is fully eclipsed, it turns a coppery orange red in color. This eclipse happened early this morning and I hope you were able to see it!

Sometimes we get so busy with our lives that we forget to notice the celestial artwork above us. In case you are wondering, the next full moon will be on March 1, 2018.  We’ll be looking up…how about you? 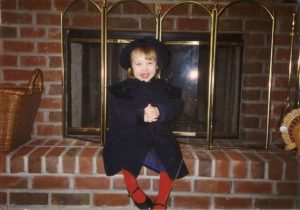 My birthday is August 1st, so my Golden Birthday was my very first birthday. I don’t really remember it but I do have a picture (in black and white) from the day! 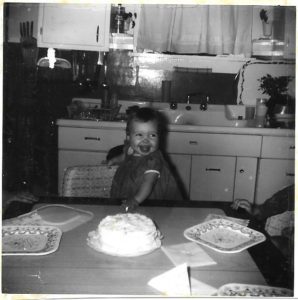 Author, Joan Bramsch, first came up with the idea of a Golden Birthday in 1955 when she was raising her five children. Over the years, this fun idea has spread. Ms. Bramsch also has a book about Golden Birthdays which includes general birthday trivia and gift ideas. (www.goldenbirthdaybook.com)

Some people take the Golden Birthday idea a step further and call the birthday when you turn the same age as the year you were born, your “Golden Year”. If you were born in 1960 and will turn 60 in the year 2020, then 2020 will be your Golden Year…not to be confused with the Golden Years! 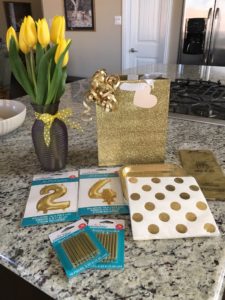 I did find multiple Golden Birthday Boards on Pinterest for decorating and gift ideas. I also found lots of Golden Birthday gifts on Amazon, including a golden imitation Rubik’s Cube.  So, who needs one? 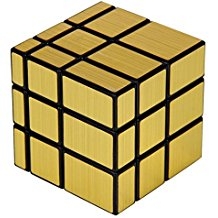 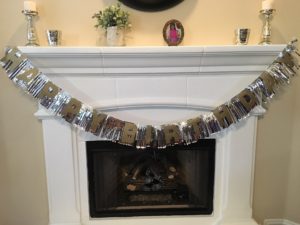 For the past 35 years or so, I’ve asked for the same thing for Christmas every December. It doesn’t cost much, but it’s always my favorite gift and my family knows that I look forward to getting the newest edition of “The Old Farmer’s Almanac.” 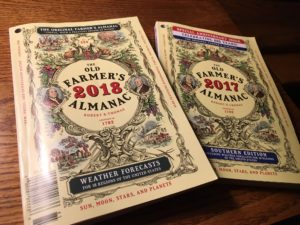 When I was a girl growing up on my grandparent’s farm, there was always an almanac lying around. And since I was that kid who read everything I could get my hands on, I would read the almanac from cover to cover before I moved on to seed catalogs and my grandmother’s “True Story” Magazines. 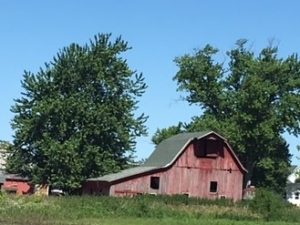 For those of you who aren’t familiar, an almanac is an annual publication that includes practical information such as weather forecasts for 18 regions of the United States, planting dates for each region, tide tables, celestial information about planets, eclipses, meteor showers, and times for the rising and setting of the Sun and the Moon, best fishing days of the year, religious and other holiday dates, recipes and jokes.  There are also interesting articles about gardening, nature, animals, games, household hints, and home remedies. 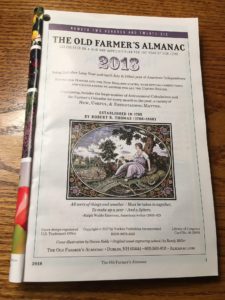 It’s exactly what it sounds like…an interesting combination of articles and facts and tables all presented with a sprinkling of humor. Or, as it says in the heading on the cover of “The Old Farmer’s Almanac”:  “Useful, With A Pleasant Degree Of Humor.”

The writer in me loves the collection of facts all contained in one small book. I also enjoy their annual essay contest which has interesting and unusual topics such as last year’s topic:

“The Historical Figure I Would Most Like to Meet and Why”

and this year’s topic:

“How Weather Changed My Life” 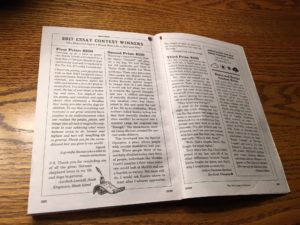 There are multiple winners of the annual essay contest and cash prizes for the first, second, and third places. The winning essays are then printed in the next year’s edition for all to read. 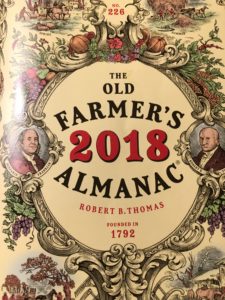 Joining his picture on the cover each year, is one of Benjamin Franklin. The well-known inventor, statesman, signer of the Declaration of Independence,  and face on our $100 bill, was also a publisher and famous for his annual publication of the “Poor Richard’s Almanack.” 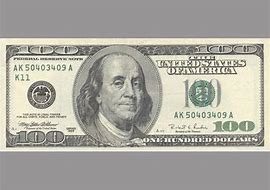 Franklin published it under his adopted pseudonym of “Richard Saunders” for over 25 years from 1732 to 1758. The “Poor Richard’s Almanak” was very popular in Colonial America and sold as many as 10,000 copies a year. It may have been a model for “The Old Farmer’s Almanac” which came on the scene some 30 years later. 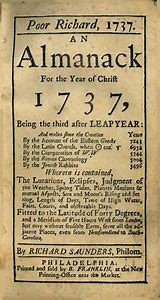 For those of you who like facts and trivia like I do, today is Benjamin Franklin’s birthday. He would be 312 years old.

Author’s note: It used to be harder to find “The Old Farmer’s Almanac” but now they are sold at Home Depot, Lowe’s, Wal-Mart, and of course, any farm and feed stores. The 2018 edition sells for $6.99.

I like this time of year. The newness of it. It’s so nice to have a whole new year stretching ahead with a clean slate and a chance to begin anew.

January is a good month for writers. The world is quieter after the busyness of the holiday season. People seem more focused both at work and at home. There is less opportunity for distraction and more time for writing. 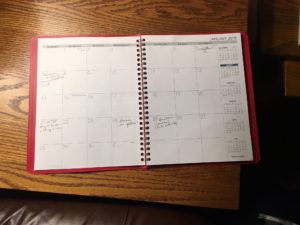 I recently saw a post on a New York Public Library blog that mentioned that a lot of authors throughout history have been exercise buffs. It makes sense that exercise would be a good way to not only stay fit, but to clear the mind and increase circulation and perhaps even improve the creative process!

Many of us have set new diet and fitness goals for ourselves in the new year. According to the Mayo Clinic, (www.mayoclinic.org)there are six strategies for successful weight loss and a boost to your health. 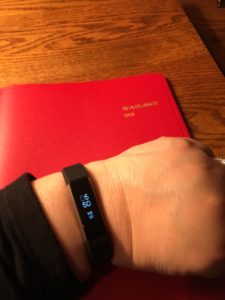 1. Make a long-term commitment to your personal fitness goals because they often require permanent changes.

2. Find your inner motivation to be responsible for your own diet and fitness behavior and be accountable to yourself.

3. Set realistic weight loss and exercise goals which will keep you motivated and help you be successful.

4. Find healthier foods to eat that you really enjoy.

5. For the best fitness results, find a way to get active that you enjoy and then stay active.

6. Change your perspective so that healthy habits become a permanent way of life. 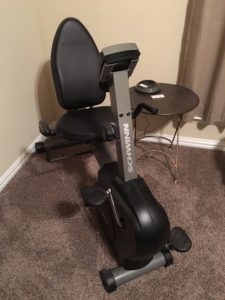 My Fitbit is reminding me that it’s time to get up and move! Wishing you much success in your fitness and other goals and resolutions for the new year!

When I was a little girl, my grandparents had a coal furnace and also a coal room in the basement of their Indiana farmhouse. In order to heat the house, the furnace had to be fed coal on a regular basis. 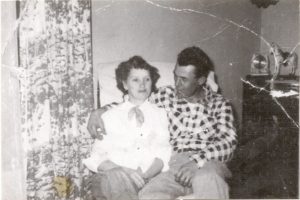 The coal room was right next to the furnace room and it had a window that opened wide to accommodate a metal coal shoot. The coal delivery truck would back up to the outside of the window and send shiny black coal sliding down the shoot onto the cement floor of the coal room. I loved to stand in the doorway with my hand on the coal shovel and watch the pile grow amid a rising cloud of black dust.

I often spent weekend nights with my grandparents and early in the winter mornings, the house would be very cold because the furnace had burned all the coal in the night. I would slip on my red rubber boots and my grandmother and I would go to the basement, where she would open the door on the side of the big metal contraption and shovel piles of coal into its empty belly.

After that, we would return upstairs to wait for the house to warm. My grandmother would turn on the electric oven, wrap me in a blanket and sit me in a chair in front of the open oven door. Once the house was warm again, she would close the oven door and say, “Since the oven is already pre-heated, we might as well make some cinnamon rolls for breakfast.”  How I loved those coal furnace mornings with her. 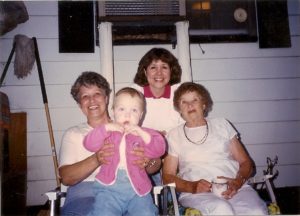 This week on New Year’s Day morning, my husband surprised me and made cinnamon rolls just like he knew my grandmother made me on those cold mornings long ago.  Several hours later, my cousin sent me a picture she had taken that day of the lane from our grandparent’s farm.  Isn’t it amazing how our loved ones who are gone can be as close as a warm memory? 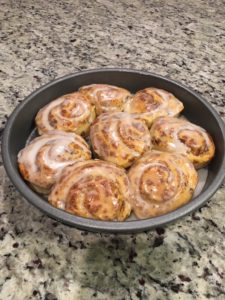 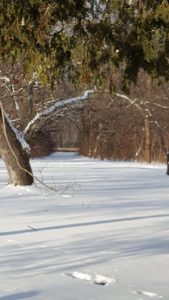